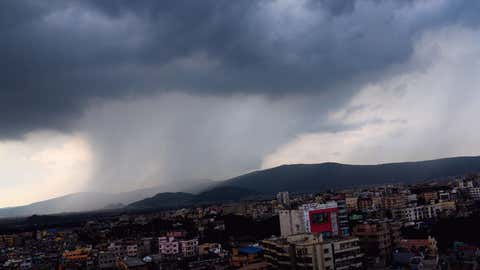 Thursday, August 12: Throughout this Southwest Monsoon season, elements of South India are receiving scattered rains. After a quick interval of energetic rainfall exercise, the area obtained some respite from incessant rains because the final week of July. Based on the most recent forecast, moist climate is more likely to return to elements of the southern peninsula within the subsequent few days.

The India Meteorological Division (IMD) has predicted heavy rain, thunder and lightning in elements of South India within the subsequent few days. Based on the each day bulletin of the Nationwide Forecast, a North-South Trough or Convergence Line is extending from the highest of a cyclonic circulation as much as North Coastal Andhra Pradesh in Bihar.

Additionally, a Contemporary Cyclonic Circulation is ready to type over west-central Bay of Bengal later this week. Because the system is transferring northwestwards in direction of Andhra Pradesh until Tuesday, heavy rain might be anticipated at remoted locations over the East Coast area. Subsequently, there’s a risk of heavy rain and gusty winds in some elements of Andhra Pradesh and Odisha from Sunday.

Based on IMD, scattered to widespread rainfall is feasible over Tamil Nadu and Kerala through the subsequent 4-5 days. In the meantime, heavy rain is anticipated at remoted locations over Tamil Nadu between August 12 and 14.

Accordingly, IMD has issued a Yellow Watch over Kerala, Tamil Nadu and Coastal Andhra Pradesh for August 12. This stage of advisory instructs individuals to be ‘conscious’ of native climate circumstances. All these locations are more likely to obtain heavy rain and thundershowers on Friday. Thereafter, Tamil Nadu and Coastal Andhra Pradesh will stay below yellow watch until August 16.

Within the final 24 hours, rain and thundershower occurred at remoted locations over Coastal Karnataka, Tamil Nadu, Puducherry, Karaikal and elements of Kerala in addition to Inside Karnataka and Coastal Andhra Pradesh.

When it comes to the full rainfall knowledge throughout this southwest season, the southern states have recorded totally different numbers. From June 1 to August 11, Telangana and Tamil Nadu have recorded ‘extra’ rainfall of 575 mm and 207 mm as in opposition to their respective long-term averages of 450 and 150 mm, respectively.

Then again, Andhra Pradesh (322 mm) and Karnataka (584 mm) noticed ‘regular’ rainfall figures. In the meantime, at 1136 mm, Kerala recorded 26% much less rainfall than regular on this timeframe.